The City of Fort Wayne Administration and Community Development Division today announced a major private investment is planned for the North River site.

More Brewing Company, which has three locations in the Chicago area, is planning to invest approximately $6 million to build a two-story, 16,000 square foot restaurant and brewery, located just north of the riverfront public space and near the intersection of Fourth and Calhoun streets. This would be the first project to be constructed at North River. 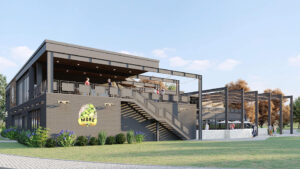 Later today, the Fort Wayne Redevelopment Commission will be asked to approve an economic development agreement as the first step in the process for the proposal to move forward. The approval of this agreement highlights the plans for continued development and investment along the riverfront.

“Being able to advance a significant development at the North River site is a tremendous win for our community,” said Deputy Mayor Karl Bandemer. “Successful public-private partnerships have positioned Fort Wayne as a leader in bringing new and unique amenities for residents, visitors, and businesses to enjoy.”

The North River property is comprised of 29 acres generally bounded by Clinton, Fourth and Harrison streets and serves as an important gateway into downtown. The site was previously used as a rail yard and other industrial type uses, dating back to 1902. The land has not been actively used since 2006. The City of Fort Wayne Redevelopment Commission acquired the property in 2017.

“On behalf of the Redevelopment Commission, we are thrilled to announce this partnership with More Brewing to be the ‘first mover’ site at North River,” said Jonathan Leist, Deputy Director of Redevelopment. “We are confident that, while this is the first private development announced for the site, there are several more projects that will follow in the near future. All of the potential projects fall in line with the community’s vision for an active, dynamic, mixed-use site on the north side of the river.”

“The More Brewing team is excited to build our first restaurant and brewpub in Indiana at North River, one of the premier development sites in the region and the state,” said Sunny Patel of More Brewing Company. “We look forward to starting construction so we will be ready to open our doors in coordination with the city’s completion of Riverfront Phase II.”

Additionally, the City plans to request approvals for site preparation and infrastructure improvements around the North River property to facilitate private development, which will include streetscape, trail, street, and water and sewer improvements.

The City anticipates more economic development projects on the North River site in the coming months. That will include multiple commercial projects that will fill in the south side of the site near Fourth Street.

The opportunity for development at the North River site would not have been possible without support from the Allen County-Fort Wayne Capital Improvement Board of Managers (CIB). They approved $4.6 million in funding for the City to purchase the North River site in 2017. The CIB has continued to be an advocate and partner for development of the site since the acquisition.

The opening of Promenade Park in 2019 was Phase I of riverfront public space development. Promenade Park quickly became one of the most popular destinations for residents and tourists in our region. In addition to being a nationally-renowned park, Promenade Park furthered the City’s proven track record of leveraging public funds to catalyze private investment.

Phase II of riverfront public space construction, which is primarily along the north bank of the St. Marys River, is scheduled to get underway yet this year and is scheduled for completion in 2024. This planned work was a significant factor in More Brewing’s decision to come to Fort Wayne and to locate at North River.

Developer Selected for “The Wedge” at Promenade Park